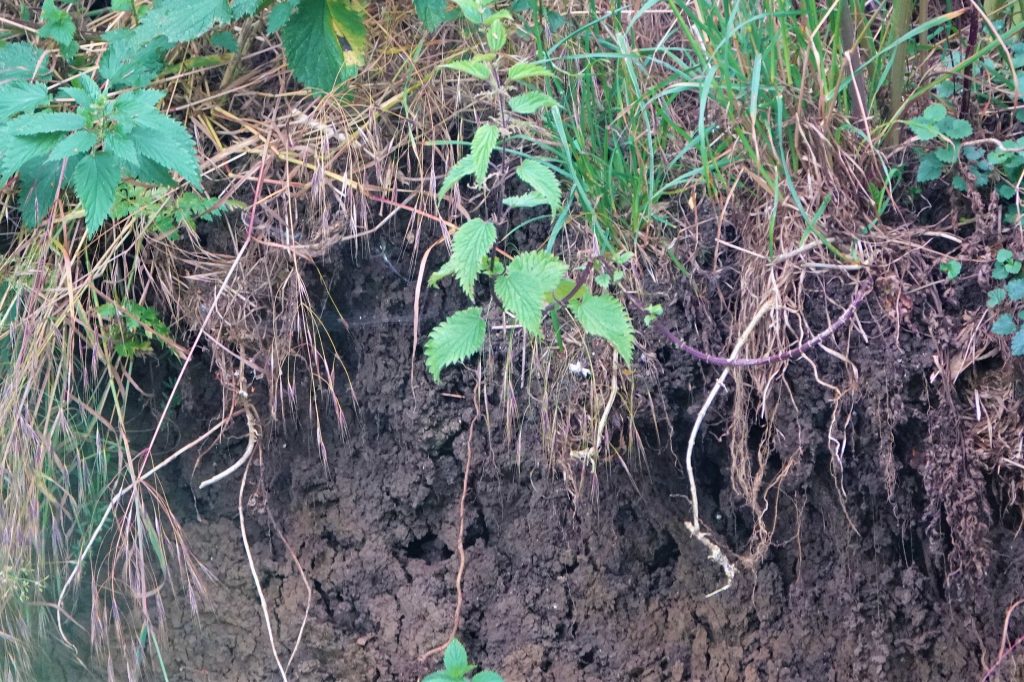 noticeably changed.  Spring has given way to summer – the leaves are fully out on the trees and nearly all the greens are dark. The buttercups have disappeared into the grasses in the meadows, clover and thistles are showing more, bindweed is starting to appear, and there are the first pink blooms of Himalayan balsam. The reeds in the river have grown so much that the old brown stems from last year are finally invisible. In places they are nearly across the whole width of the cut. Very few butterflies are showing yet, but the food is there for them when they arrive.

I heard the odd kingfisher call but wanted to see if the nest was still being used. That meant wearing waterproof overtrousers and a kagoul because the nettles are now so high and any trace of the paths from before had vanished. As it happened it started to rain as I pushed through the undergrowth so the gear didn’t seem so daft even though it was hot and humid. I stayed for an hour and there was no sight or sound of a kingfisher in all that time.

I was shocked at the condition of the bank. Before I went away I took a photo of the nest hole and vegetation was just beginning to appear at the top of it. But now I couldn’t make out where it was at all. The bank was covered in scrub greenery, but worse, the section where the hole had been was barer than before. It appeared there had been a landslip. The bank had lots of cracks in it before, and I had been concerned that the nest might collapse, but I hadn’t considered that it might happen to the whole section of bank.

The pair had been going in and out of the nest regularly before I went away, but if they were still intent on breeding they would need to have found a nest elsewhere.