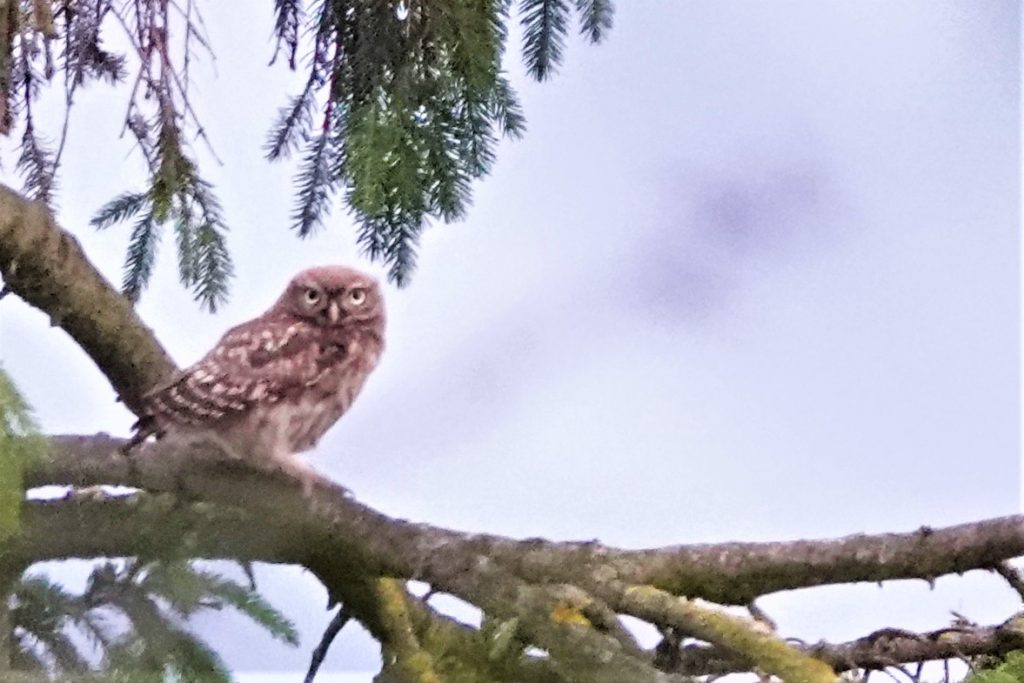 and have heard some interesting sounds that are new to me. The first is the hiss of a little owl, which is a bit like a a swan but shorter and less alarming, like a short exhalation of breath. Reminiscent of a barn owl but somehow friendly rather than terrifying.
I’ve always been interested in the local connection to the Little Owl. When I first came to this area in 1983 it was to rent a workshop in a new craft centre in a stable block at Lilford Hall. This was the ancestral home of the Fourth Lord Lilford, who was a noted bird collector and had aviaries there in the 19th century as well as commissioning some of the great artists of the time to do bird illustrations. He also introduced the Little Owl into Britain from mainland Europe.
I’d never seen one, but heard there were some near some allotments at Stoke Doyle, only a few miles away and went over there on a couple of evenings. The land around the village is farmed by the Gent family, who have been famous for farming with wildlife in mind for several decades. The owls came out when the light had faded, so a good photo was difficult, but at least I managed to get an image of a typical pose.
The second sound was a sort of slightly grunty “awwwhhh” from behind a willow tree when I was waiting on the riverbank the next day. A single call about every 30 seconds. It was quite deep and had to be a waterbird of some sort – maybe a cormorant, but less braying? I couldn’t see it and was stumped. Then after a few minutes a heron flew out! I only knew the prehistoric pterodactyl “craaaaak” of its flight call. I’d never heard anything like that before.
Later I was sitting by the stream which comes into the Nene from Glapthorn, wondering whether the fish-carrying kingfisher I saw earlier was headed for a new nest up there. Suddenly there was a sound like a drone – in fact it was so loud I looked up expecting to see one hovering right overhead – but it was a large swarm of flying insects (maybe flying ants as there were national reports that they were even showing up on weather radar at the time). I couldn’t see what they were but they were the size of bees and were travelling at quite a speed. There were so many it must have taken three seconds before they passed over and it was quiet again. That’s something I’ll never forget – I was mighty glad they were flying at rooftop height!